Jeff Zwiers, author of Academic Conversations: Classroom Talk that Fosters Critical Thinking and Content Understandings, recently conducted a professional learning seminar in my district. Before the seminar, many colleagues and I were under the impression the district expected our academic conversations to look similar the academic discourse between student and professor you'd see in an upper division college course. 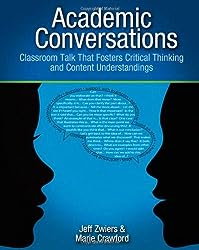 Many of the examples Zwiers shared with us were nothing like we previously thought. The one I took to heart most was the "Your Turn" activity. As Zwiers demonstrated the strategy, with cue cards and all, I immediately harkened back to some of the design thinking strategies I learned in Sydney at the Google Innovator Academy.

Learning about design thinking, we were tasked with building a chair out of aluminum foil. From there we had to pair up and explain our chair and decide who's was better. This fostered a conversation of our thinking, design and more. The next step was to "defend" our chair to another pair and repeat the process. This continued until the group was divided in half, each "defending" a chair design. In the end, Geoff Derry's "Volcano Chair" won.
As Zwiers went on about the "Your Turn" activity, I couldn't help but see countless similarities with the aluminum chair design thinking activity. The conversations I had with my cohort mates were the exact type of conversations I want my students to have. Upon further reflection, I had an idea to incorporate the "aluminum chair", "Your Turn" and hashtags. I have spent a great deal of time this year using hashtags to help students create content to real-life connections. Slowly but surely, they are starting to get it and beginning to see themes and patterns between World History and their personal lives. This idea smash begins like so. Students review notes and the hashtags they wrote on a specific concept. They write their hashtag on a note card and add a few bullets to help them explain it. They then pair up and "battle" a classmate 1 on 1 sharing their hashtag and explanation. After each shares, as a pair, they decide together which hashtag and explanation best encapsulates the main idea and theme of the concept.

Today was my first attempt at this activity. Student engagement was high and I heard many students who don't like to talk actually taking part in academic conversations. It was refreshing to hear the "quiet kids" talking about their favorite movies and music and explaining the similarities to the history content.

Overall, I was very pleased with our first iteration of the Hashtag Battle. Today's concept was urbanization during the Industrial Revolution and its many problems. In the final battle, the hashtag #AntMan took the honors. The winning team's explanation dealt with the dangers of child labor in factories and mines. They said children were hired not just because they could be paid less, but their small size, like Ant Man, made them perfect for tight spaces in mines and for fixing factory machines where grown men couldn't fit their hands.

A place of growth I need to address is as the groups get larger, more students feel as if they can hide in the shadows and not participate. It can easily be dominated by a few students. Moving forward, I am planning students to generate sketchnotes of their learning, but at the same time, I am open to suggestions of other ways to build upon this attempt at academic conversations.

Posted by techcoachjuarez on October 27, 2017