The Cardinal Innovation Center Social Media Posse is one of the Center's layers that has been slow to develop. The current generation of students are very adept at social media, but are apprehensive about using social media for anything school related.  Jason Markey (@jasonmmarkey) preaches the virtues building a positive school culture through the power of social media. George Couros (@gcouros) talks of developing a school's positive digital footprint. If a school doesn't take control of it's social media presence, an angry parent might

Couros and Markey's messages fuel the mission of the Social Media Posse. The Posse's mission is to empower students to take control of the school's social media presence and footprint. Doing this will help build a positive school culture.

During the first two home football games, 11th grader David Magana (@dmagana559) has taken it upon himself to live tweet the game action. Each week, David has improved. In week 1, he managed a half dozen tweets, but in week 2, he tripled it. Each week, his ability to capture the action in 140 characters improved.

This last Friday was the Orosi High School 2017 Homecoming. The Social Media Posse took the next step and added Instagram to its repertoire. David, for the night, took control of the school Instagram account while I manned the Twitter account from the press box. David patrolled the sidelines snapping action shots and posting quick videos using the hashtag #CardsCare.

The Cardinals romped to a 58-28 homecoming night victory over league rival Farmersville. Star running back Jeremiah Huerta exploded for 384 yards and 8 touchdowns. His exploits and those of the rest of the Cardinals' football team can be found on the Cardinal Innovation Center Social Media Center website. Local news outlet The Fresno Bee took notice, via Twitter, and named Jeremiah "Bee Star of the Night" for his record setting performance. Click here to read the Fresno Bee's feature on the Cardinal's Star Running Back. 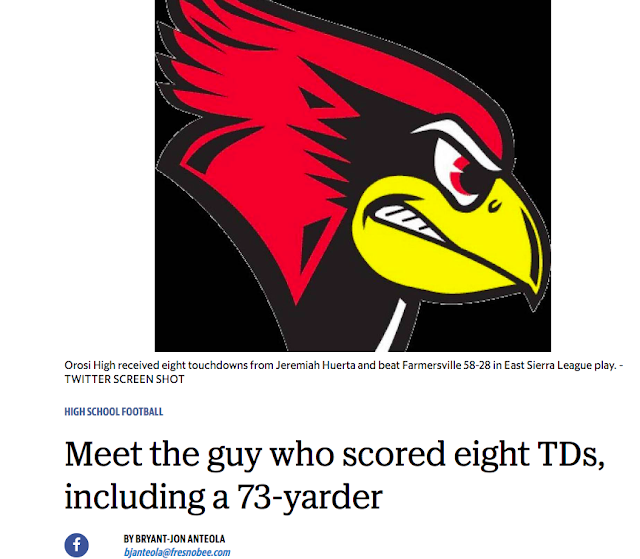 Posted by techcoachjuarez on October 08, 2017