As the Cardinal Innovation Center continues to evolve, the biggest hurdle to date is consistently getting students involved virtually and physically. Being able to teach a few history classes is keeping the project afloat, but merely being afloat is not the end game. I envision this project being a resource to empower learning and teaching school-wide.

Yesterday was the busiest day to date. From the time I opened the doors at 7:30 am until closing them at 5:00 pm, the action was non-stop. At night, teachers were sending me student booksnaps to be curated in the Cardinal Booksnaps gallery on cardinalinnovationcenter.org.

I have been dreaming of a day like this since the beginning. After teaching two periods of World History, the remainder of the day, the room was filled with freshman Digital Literacy students who were working on the Google Certified Student program I designed. Our 11-12th grade Computer Science students came in and out throughout the day to screencast a presentation for the apps they're building for Tech Rodeo.

At lunch, more freshman came in to continue with the Google Certified Student program. The Cardinal Innovation Center Tech Squad met during lunch to continue building the website for the Assistance Service Dog Educational Center in Woodlake, CA. After school, a parent showed up to inquire about how her son could get involved with the Dog Educational Center and Tech Squad.

Long story short, yesterday was a banner day. The Cardinal Innovation Center was full of life, innovation and energy. Too often, though, hours go by with nothing going on. If yesterday is an omen for things to come, my vision for the Cardinal Innovation Center will become a reality sooner rather than later. Get ready Crystal Miller, I am going to need a lot of support and guidance!

Posted by techcoachjuarez on November 30, 2017 No comments: 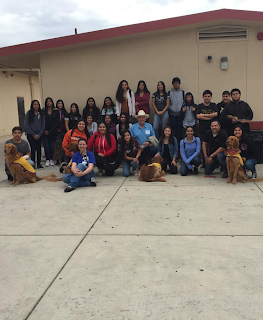 My Google Certified Innovator Project, the Cardinal Innovation Center, has been called an "onion on steroids" due to its many layers. Two of those layers is the Cardinal Tech Squad and Social Media Posse. Like many schools across the world, student tech teams are being formed to provide IT and tech integration services. In forming the Cardinal Tech Squad, I envisioned a team that had reached beyond the school site into the community and beyond

At this point, the Cardinal Tech Squad has done the bulk of its work with parents getting them signed up with Gmail and access to the Illuminate Parent Portal to check their kids' grades. An amazing opportunity to work with the Assistance Service Dog Education Center (ASDEC) from nearby Woodlake, CA fell into our lap. My mother, volunteers for ASDEC weekly to help train golden retrievers to be service dogs for a plethora of needs ranging from picking up objects to PTSD to low blood sugar detection for diabetics.

One day, after volunteering, my mom brought it to my attention that ASDEC is struggling financially and needs to build a larger digital footprint in order to attract more business, volunteers and donors. Immediately, the Cardinal Tech Squad and Social Media Posse jumped to mind. I saw this as an opportunity to empower students to help ASDEC stay afloat, grow and continue to change the lives of people with special needs. If successful, my students, with their burgeoning tech skills, would be making a huge difference in the lives of many.

It was brought to our attention that many celebrities have been known to donate to such causes. Our challenge is to get their attention via social media, blogging and a new website. The old ASDEC website had not been maintained in years. The Cardinal Tech Squad, all two of them, began building a new website to showcase the Center's mission, vision and services provided. The Social Media Posse created a Twitter account for ASDEC. 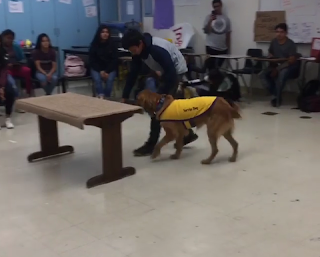 Today, to accelerate our efforts, ASDEC founder Gerald Whittaker brought his protege and a handful of volunteers to do a live demonstration for some Orosi High School students. Members of the Tech Squad attended and took notes to continue developing the website. 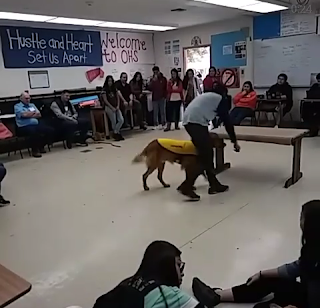 The Social Media Posse posted images and video clips on Instagram and Snapchat. Take a look below to see some of the sights and sounds from this great learning experience. In addition, the entire demo was live streamed on YouTube. Click here to view. 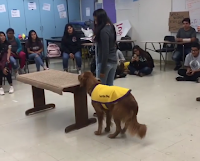 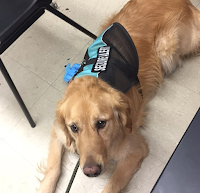 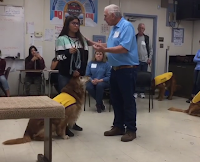 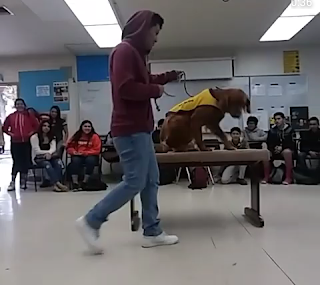 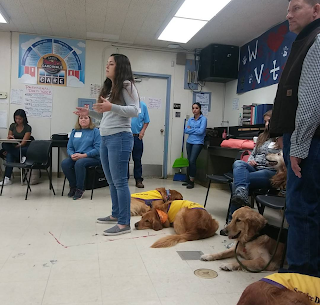 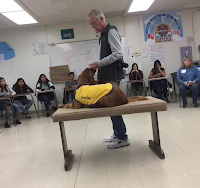 Posted by techcoachjuarez on November 16, 2017 No comments: 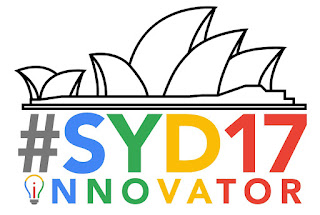 Now that I could breathe after nearly losing my phone and wallet in a foreign land, the Google Innovator Academy experience took me by storm. The vibe of the cohort was infectious. The energy was amazing. It was so cool to finally put faces to the names I had seen popping up in the cohort Google Hangout for a month.

One of our first activities was to build a chair. The first person, other than Stuart Kelly, I really met was Gareth Haddon. We met in the first round of the design a chair with aluminum foil activity. After our conversation, his chair won. It was clearly better than mine, but in round two we had to go with the other team. In the end, it was Geoff Derry's "Volcano Chair" that won the day.

Being part of an international cohort, from my perspective at least, was such an eye-opening experience. Seeing the ideas, needs, struggles and questions from educators across Australia, New Zealand and parts of Asia gave me a whole new perspective on the learning needs of teachers and students beyond the US.

The Design Thinking process was a powerful new learning experience. I had heard so much about it from my Innovator friends, but seeing it live from Les McBeth was a different story. I loved the slogan "Fall in love with the problem, not the solution." Learning to tear my project apart into small bits was enlightening. It allowed me to find flaws in parts of my project that I didn't realize existed.

Design Thinking is something I have been trying to implement in the classroom since Sydney. One of the Design Thinking strategies I have employed is Crazy 8s. We did Crazy 8s as a method of ideation. I found my students absolutely love this activity. I use it as a method of introducing new concepts to students.

Each morning, I had the privilege of hanging out at the amazing Banquerie located in Sydney's Pyrmont. The meat pies were too die for. The coffee wasn't bad either. What made the Banquerie memorable was the ambiance and the company. This establishment was an old bank. The vault was where the oven was located. Did I say the pies where amazing? They were. Each morning cohort mates Adam Brooks, Monica Limmer, Becky Shorey and Judy Blakeney would meet me there for breakfast. The food at Google was great, but the Banquerie became our thing.

Dinner on the second night was a blast. After a long day of learning, collaboration and feedback, we were treated to some amazing Dim Sum, massages, a magic show and karaoke. I have to toot my horn a bit. I did get the karaoke party started. Wendy Gorton and I did duet for "Baby Got Back". Afterwards, I grabbed the mic and dominated LL Cool J's "Mama Said Knock You Out." From there, karaoke was in full swing including a large group of us belting out "Bohemian Rhapsody." 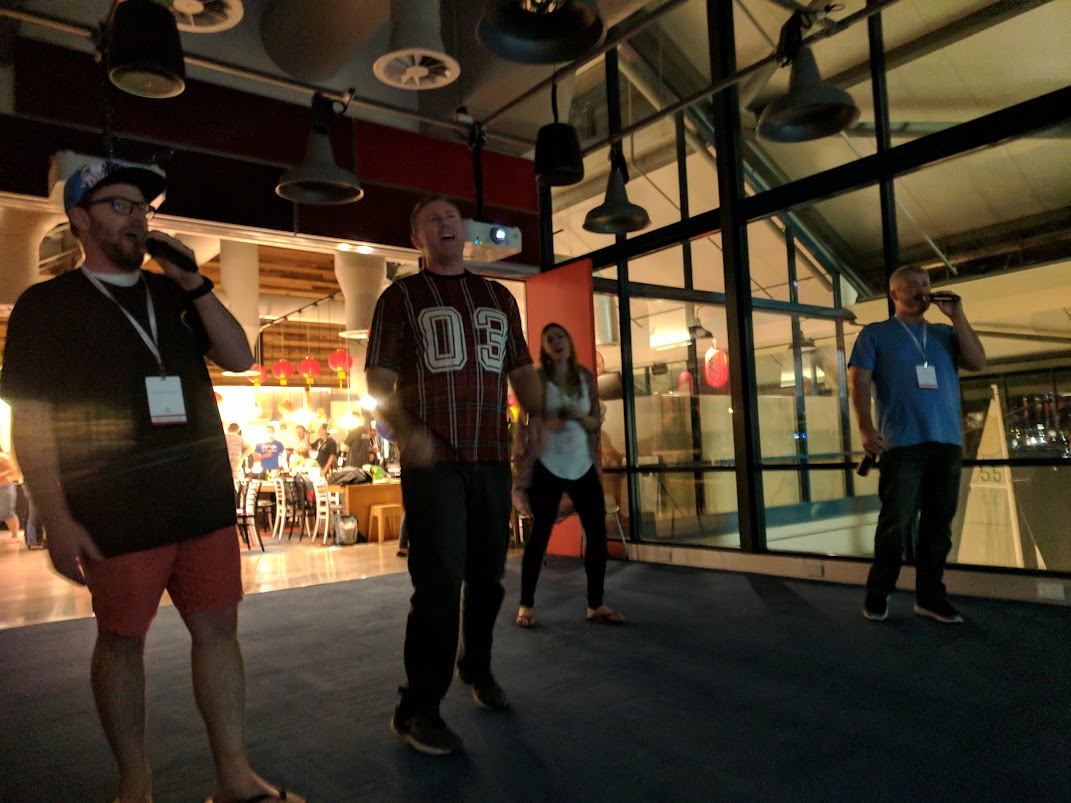 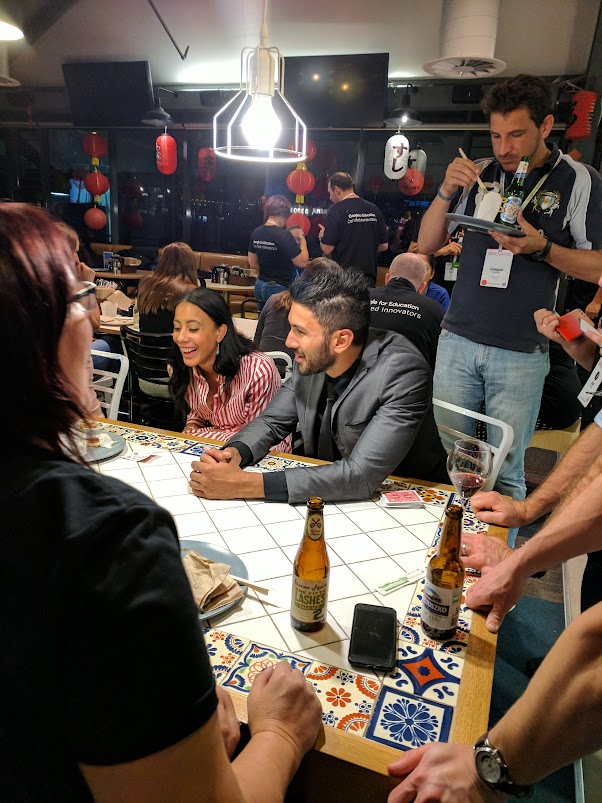 As the Academy wound down, we we're given resources to begin with the Google mentor choosing process. Luckily for me, I was blessed to have been paired with good friend Crystal Lane Miller. Crystal and I have been regularly communicated via Gmail, Hangouts and Twitter. Her advice has been tremendous and she's been advocating for me. 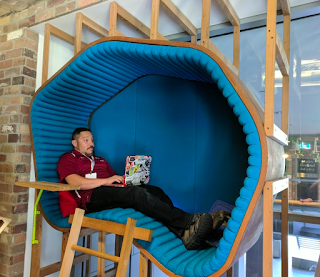 Graduation day was a blast. My tour guide Suan gave a wonderful tour of Google HQ. I was totally digging the couch in the wall. The graduation ceremony was live streamed on YouTube. A professional sketchnoter was brought in to sketchnote the ceremony as well. They saved our team for last. They did get our walk up music mixed up, but it did give us one last chance to do our infamous "Judoknow" chant. When it was all over, the champagne was flowing and I made sure I took a selfie with everyone from the cohort. Each selfie is posted on a MyMap currently on my website homepage. 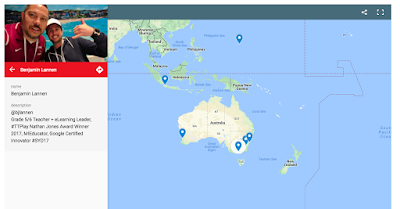 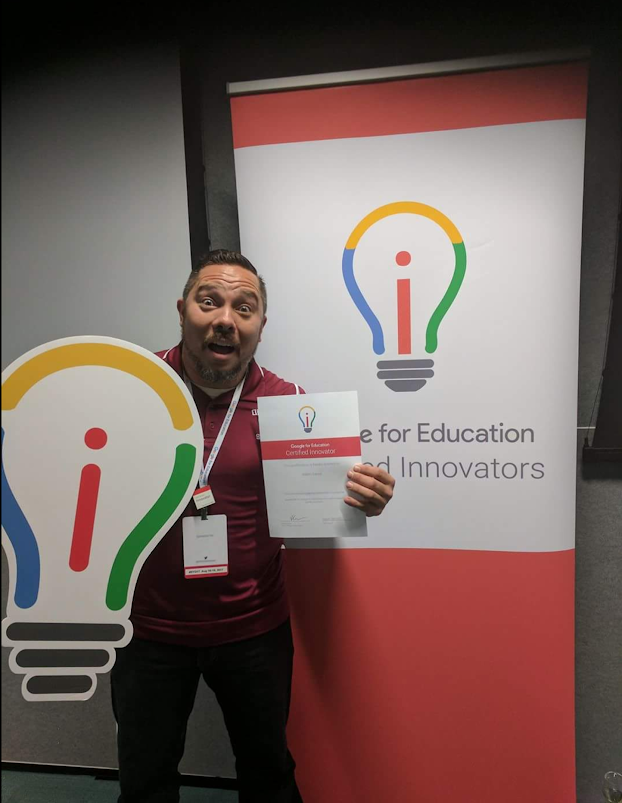 After saying goodbye to the coaches and cohort mates, my soulmate Katherine, from #TOR16, and I had an adventure exiting the building. When we finally found a door to the outside world and exited, an alarm went off. We just ran! When we caught our collective breath, we Ubered across town to Venomous INK Tattoo. Now that I had joined Katherine among the ranks of Google Certified Innovators, we decided to get the ultimate souvenir. We got matching Google Innovator lightbulb logos tattooed on our right forearms. For Katherine, it was her first, but my fifth tattoo. The artist took pictures of her work, but we reminded her, these tattoos don't go for just anyone. We jokingly told her if someone wants this tattoo, they have to show their Innovator credentials first.

We posted some pictures in the #SYD17 Hangout and many couldn't believe it. Mark Wagner said he had to see it himself. When we finished we met up with Mark and the coaches to show off our tattoos. The looks of shock were priceless. 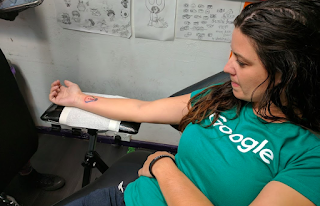 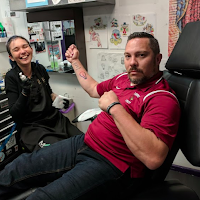 The opportunity to work with, learn from and connect with so many innovative educators has given me a new perspective on my profession. Design Thinking and the feedback received on my project was eye opening. My project, the onion on steroids it is, is definitely a moonshot. Going forward, after Sydney, I learned to focus on one small part at a time. If I am going succeed, I can't try and do it all at once.  Looking back, the Google Innovator Academy experience in Sydney is something I will never forget and I will continue to grow as a result.