Watching my good friend Ed Campos (@edcamposjr) implement 360 Math immediately made me want to synthesize and adapt it to History. Now that I'm back teaching part time, I have that opportunity. The whiteboard walls of the Cardinal Innovation Center make teaching 360 History very easy. From 360 Math, I gleaned the importance of making thinking visual and looking for patterns and connections. This thinking and search for patterns/connections fits right in with my ideas for using hashtags in history class.

Today marked our first look at Napoleonic France. I pre-recorded the lesson which was a 15 minute survey of Napoleon's time as ruler. Students watched the lesson video on Chromebooks with headphones. They were given three options for note taking. They could take Cornell Notes in their notebooks, type notes in Google Docs or Keep, or write notes on desk and take pictures to be stored in Google Drive. 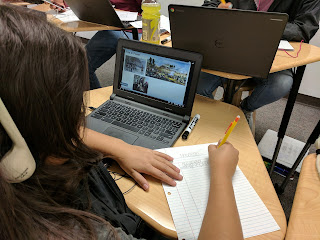 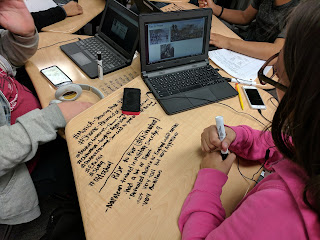 At first glance, this activity appears to be very student-centered, but with no interaction with the teacher. Oh contraire. In the beginning of the lesson video, first slide, I wrote a jumbled list of hashtags that are applicable to each slide. I gave brief description of each. Students were required, after each slide, to pause and reflect on the notes they took. In their reflection, they needed to determine and write down in notes which of my hashtags best fits the notes for that slide.

Once they connected my hashtags to their notes, they were required to generate their own hashtag that connects the content to their real life experience. They were to write their hashtags in their notes as well as on the whiteboard walls. There were seven slides in the lesson video and they were required to write a hashtag in notes and on wall for each. Once they wrote mine and their hashtags in their notes, they had to look around the room and "steal" a hashtag from someone else to put in their notes. At the end of each slide, they had at least three hashtags. One from me, their own and from a peer.


As they are writing their hashtags on the walls, I am circulating and constantly asking questions. I ask them to explain to me what the connection is. If they can give me a valid explanation, it counts. Some students checked with me first before writing on the wall. Long story short, I was able to give instant feedback in a variety of ways.

Many students, at first, struggled generating hashtags. Seeing their struggle, I had everyone pause and I told the class to think of movies, TV and music. I told them to find connections from the content to those things. Almost immediately, the wheels started turning and the creative juices were flowing. The walls quickly began to fill up with hashtags.

Going forward, students will take a look at their notes and be required to reflect. They will look at the hashtags written in their notes and highlight the parts of their notes that correspond to the hashtags. They will use their notes and reflection to begin their next learning demonstration. Their next learning demonstration will give them the option of screencasting a presentation discussing pros and cons of Napoleon, creating a website for Napoleonic government or making a meme slideshow (with rationale) of the major events of Napoleonic France.
Posted by techcoachjuarez on October 17, 2017