Teaching two sections of World History has given me the opportunity to implement many of the innovative ideas and pedagogy I have learned on my three year journey as a tech integration coach. The fact I get to teach in the Cardinal Innovation Center makes it even more special.

Lately I have have been dabbling in elements in blended learning. Students have been accessing content through pre-recorded lecture videos of me teaching a lesson. At first, the students liked being able to go through a lecture at their own pace, but some still craved the interaction with a "live" teacher.  To address this, I took advantage of the Cardinal Innovation Center's whiteboard walls. These walls were donated through the "World's Most Dangerous EDU Non-Profit" known as Classrooms with Attitude (C.W.A.). C.W.A. is the brainchild of my friend, colleague and #CUETangClan brother Ed Campos (@edcamposjr).

Ed champions #360Math. Being a history teacher, I am attempting to adapt #360Math to history and create #360History. Since my students were craving interaction with a "live" teacher, I decided to use the whiteboard walls in a #360Math manner. Students were instructed to watch the lecture video as usual, but as they came up with questions for their notes, they would have to write their questions on the whiteboard walls. Once they wrote their questions, I could stand in middle of room, rotate 360 degrees, see all questions and immediately respond one-on-one. In addition, I added a stipulation that they had ask at least one question using Google Hangouts. This way students who wanted interaction with a "live" teacher and those who enjoy the self-paced, virtual method feel their needs are being met. 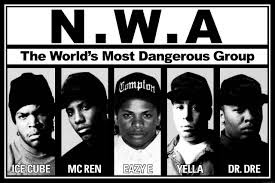 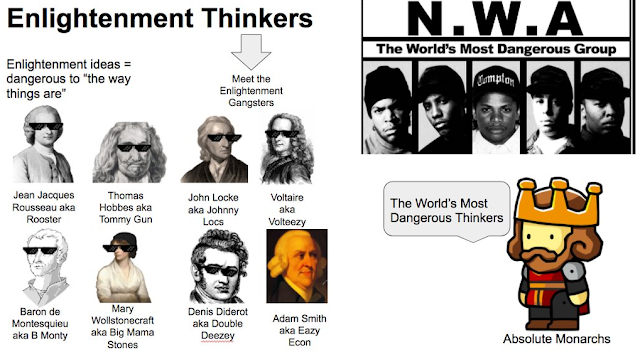 As students went through the lesson video, common questions written on whiteboard walls and via Google Hangouts had to do with clarification on the connection between Enlightenment thinkers and N.W.A. Students were engaged by the N.W.A. connection, but required more clarification on the connection to the content. The whiteboards and Hangouts gave me quick, easy insight into what students needed. In addition, they earned participation points for writing on whiteboards and texting via Hangouts.

Long story short, this can all be summed up by highlighting the importance of prompt feedback and checking for understanding. Whiteboards and Hangouts allowed options for students to communicate with the teacher and gave, me, the teacher instant data from which I could provide feedback.

On that note, I would love to hear some feedback and thoughts.
Posted by techcoachjuarez on September 13, 2017