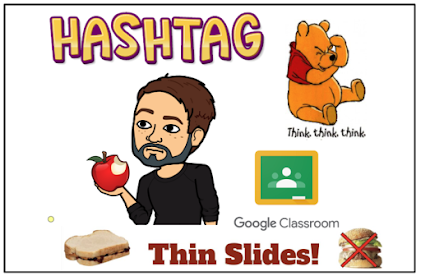 Hashtags became popular in the early days of Twitter. Early Twitter users used hashtags to categorize Tweets, making them easier to search and find. Since then, they have become a major part of pop culture and the lives of students. For instructional purposes, I have been using the concept of the hashtag as a method of fostering real life to content connections, reflection, feedback and metacognition.
Getting students started with "hashtagged learning" is easier said than done. Like any new idea or strategy, it will take kids a few repetitions before they grasp the concept. When I introduce the concept, I repeatedly remind students to reflect on learning with this question, "What does this remind me of?"
Every student has a unique life experience that can be leveraged to help students learn.
I want students to develop the habit of seeing themselves in what they learn. I want them to make real life to content connections. This can be done in all grade levels and subjects. Hashtag reflections can be used as an exit ticket, asynchronous reflection on notes, a part of Thin Slides, and more.
Here are some sample hashtags from a lesson I taught years ago on the Korean War.

#LineOfScrimmage - The Korean War reminds of a football game. In football, controlling the line of scrimmage and pushing your opponent back is important for winning. At first, the North pushed the South back to the ocean. Then the US helped the South push the North back to China, but then the Chinese helped North push them back to the 38th Parallel.
#PushItPushItRealGood - As I was learning about the Korean War, I kept hearing the Salt-N-Pepa song "Push It" in my head. The line between North and South Korea kept getting pushed around until it finally settled on the 38th Parallel.

#Hairline - In the Korean War, the line between North and South kept getting pushed back by each side. This reminds of people who go bald and their hairline gets pushed back further as they get older.

#ChaChaSlide - The Korean War reminds me of the song "Cha Cha Slide" because the song tells people what to do and makes them keep moving the entire time. The line between the North and the South during the war kept moving just like people do during the song.

The screenshots below show examples of how to have students use hashtags as a method of reflection in Google Classroom. This method can be done with both synchronous and asynchronous lessons.
Set up a Question in Google Classroom. Instruct students to reflect on notes taken on a recent lesson. Have students ask themselves "What does this remind me of?". Encourage them to think of life experience with friends and family or things they've seen in movies, TV and pop culture. Be sure to remind students to write a 1-2 sentence rationale for each hashtag. They can write any hashtag as long as they can rationalize the connection to what they learned.

Below are some sample hashtags students wrote about what they learned from a lesson on Thomas Paine and Common Sense. This was one of the first times they engaged in a hashtag reflection. My favorite is the hashtag #AOC in which the student saw a parallel between Thomas Paine and current congresswomen Alexandria Ocasio-Cortez. 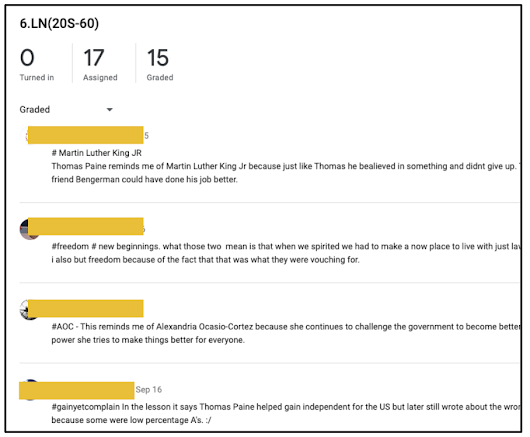 For synchronous lessons, hashtags can be adapted to be part of the Thin Slides Eduprotocol. In Google Classroom, create an assignment with a Google Slides presentation attached. The presentation only needs to be one blank slide. Be sure to make a copy for each student. Students are given 3-5 minutes to add one picture and one word ONLY to their slide. Their picture and word must be about something they've learned.
When the slide building time is up, the teacher will present each kid's slide. Do this in Classroom as if you are going to grade the slides. From there, you can click quickly through each student's slides. When their slide shows on the screen, they unmute and have 7-10 seconds to explain the topic. The picture and word are there to remind and help them remember what to say. To adapt Thin Slides for hashtags, replace the one word with a hashtag. When a student presents, they will verbally explain how their hashtag connects to the topic or concept. 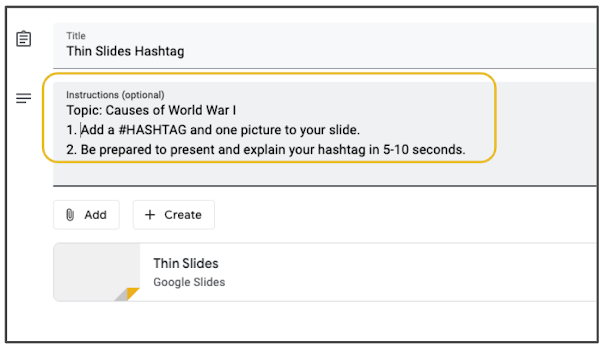 Hashtags can also be used as a method of metacognition. Students can engage in spiral review by having students review hashtags from previous lessons and reflect on what the author of the hashtag was thinking. This can lead into class debates and or academic discussions.
If you have any questions and would like a follow up, contact me via Gmail or Hangouts at ajuarez@techcoachjuarez.com.
My book, The Complete EdTech Coach: An Organic Approach to Digital Learning, co-authored with my wife Katherine Goyette is now available on Amazon. Click here to purchase. It is published by Dave Burgess Publishing. Be sure to follow the hashtag #OrganicEdTech and #CVTechTalk for updates.