Twitterizing your classroom has been a pet project of mine. An action research project I did in my Master's program got me thinking about increasing student engagement using technology. One the ideas I came up with was using the concept of Twitter and hashtags to help students make real-life to content connections. Being back in the classroom part time this school year, I have been able to put this idea to work and, as #AlwaysInBeta suggests, the idea continues to iterate.

Hashtagging Your Teaching, as I call it, follows the same basic structure each time. One could call it my own #EduProtocol. It begins with an appsmash of Google Classroom, Google Slides, YouTube and Snagit screencasting software. I create bullet-free Google Slides full of images, symbols and teacher generated hashtags. From there, I use Snagit to screencast my lesson. Lessons range from 15-25 minutes depending on the standard. In the screencast, I'm explaining and teaching the standard as I would delivering the lesson live to students. The style I employ is patterned after Keith Hughes of Hip Hughes YouTube channel fame. Once the video is complete, I upload to YouTube and distribute to students via Google Classroom.

The lesson takes place when students watch the lesson video, with headphones, and take notes (digital or paper) at their own pace. The advantage this gives students, EL's especially, is that they can pause and rewind when they don't understand. Instead of facing the embarrassment of having to ask a question in front of class, I can circulate and come to them as needed one on one. In addition, the image and symbol heavy slides force students to "make notes" not take notes. When I say take notes, I mean copy bullets. This is huge for ELs who may struggle with the written language, but they can better engage with symbols and images as well as my verbal explanations, metaphors and hashtags in the video. 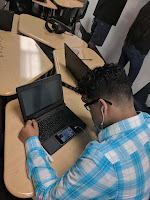 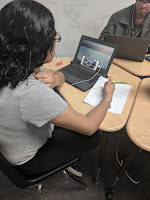 As students navigate the video, they are instructed to pause at the end of each slide, reflect and write a hashtag (with rationale) showing a real-life to content connection. This is huge for all learners because it validates their prior knowledge, life experience and interests as well as helping them see themes and patterns between content and life. Students write the hashtags and rationales in their notes as well as on my whiteboard walls. This allows me to see their thinking and give feedback if I notice the connection between hashtag and content is weak. In addition, students are instructed to "steal" a classmate's hashtag from the walls and write it in their notes. At the end of each slide, students now have three perspectives, the teacher, their own and that of a peer. 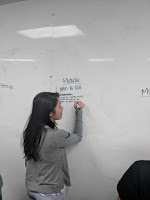 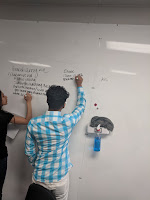 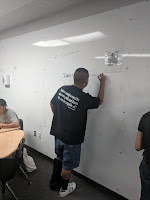 Take a look at the some of my favorite hashtags and connections made by my students during our recent lesson on World War II: The Pacific Theater. (10th Grade World History)

(Disclaimer: I took the liberty of clarifying some of their rationales after speaking with students.)

Pearl Harbor - #CharlotteFlair - Ric Flair and his daughter Charlotte Flair acted sneaky, like Japan attacking Pearl Harbor, when they sneak attacked Charlotte's opponent Paige on Monday Night Raw on May 9, 2016. (This student is a huge fan of WWE and frequently connects it to content.) 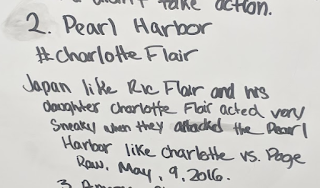 Japan vs. USA - #DanceMoms - The girls in Dance Moms are similar to Japan. They start taking other opportunities even though, Dance Moms character Abby tells them not to. Japan was brutally building an empire in Asia even though their actions were denounced by the USA. (This student is a fan of reality TV shows and frequently makes connections to content.) 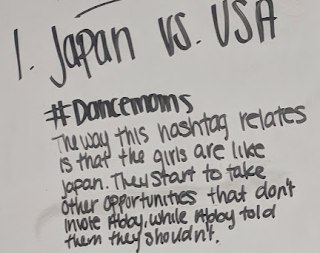 America Strikes Back - #PredatorVision - When the US cracked Japanese code, it was like they could see the enemy with the same advantage the Predator has when it hunts humans. (This student is fan of sci-fi movies and usually makes similar connections to content.) 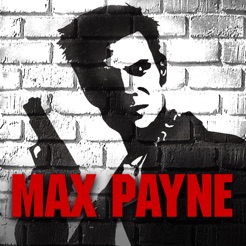 America's Strategy - #MaxPayne - In the Max Payne video game, Max has some choices that are very difficult and he has to choose which one is the lesser of two evils. This is similar to the options the US had when deciding to invade Japan or drop the bomb. (This student frequently connects content to his favorite video games.)

Japanese Brutality - #TerminusAndNegan - Seeing the brutality shown to Japanese prisoners of war, after learning about the Bataan Death March, in the Walking Dead, both the Terminus cannibals and Negan's Saviors showed similar brutality towards prisoners or conquered people. (This student is a huge fan of The Walking Dead and usually makes connections from the show to content.) 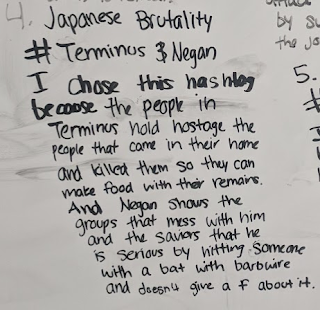 The question remains. What do you do with all the hashtags. Other than getting students to begin to think critically to look for themes, similarities and patterns among their interests and content, the hashtags can be used to jumpstart engaging activities such as Booksnaps, Sketchnotes, Student-Generated Lesson Videos, simulations, blogging and more!

I have been hashtagging my teaching all school year and the current iteration was built upon previous iterations. It will continue to evolve like any strategy I employ because my teaching is #AlwaysInBeta.