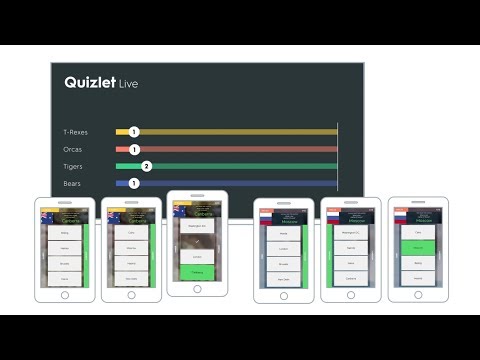 A few weeks ago, I had the privilege of co-teaching a week-long lesson on Medieval Manor Life in a 7th grade class. To kick off the lesson, the teacher and I adapted the Fast & Curious EduProtocol, Quizizz version, to include Quizlet. As most of students are English learners, developing vocabulary is a must. The smashing of Quizizz and Quizlet was a great help in doing that.

In a nutshell, students individually spent 7 minutes on a pre-made Quizlet study set getting to know the vocabulary cold turkey. When 7 minutes of solo practice was up, they moved into 3-4 rounds of Quizlet Live. Quizlet Live randomly groups students into teams of 3-4. When the game begins, each member of the team has a few potential answers, but only one actually has it. The team is forced to collaboratively discuss the prompt or vocabulary and determine which member has the right answer and submit.

I could go into all the details of the mechanics of Quizlet Live, but what really stood out to me was the smiles on faces. This lesson took place on a Monday morning. The energy in the room felt more like a Friday. The conversations were organic and not forced. The feedback from Quizlet to teams who made mistakes was instant and you could hear kids talk resiliently about not missing that one the next time.

This class had a couple of students who are on IEPs. An aide is also present for additional support. The teacher discussed with me beforehand the accommodations we would need to make and tried to plan scaffolds to help these kids fully interact in the activity. Credit to those two kids, none of the accommodations were necessary. The aide stood back and let them jump it. They fully participated. What was most encouraging was the looks on their faces. These are kids that often feel left out from interactive activities, but in this Quizlet Live session, they felt like part of a team. They felt needed and wanted like never before. Both were beaming the entire activity. Other kids were psyched when they found one of these two ended up on their teams for a new round.

In a nutshell, Quizlet Live did create a boisterous atmosphere. Not all teachers are used to that, but in this case, the learning was collaborative, authentic and two kids who don't normally fully engage felt proud to be part of the team. My question to you is, who are those kids who might feel left out and how may you leverage tools like Quizlet to help make them smile and feel included?
Posted by techcoachjuarez on November 05, 2019